This year, scientists across the globe are celebrating the 150th anniversary and International Year of the Periodic Table (IYPT). In a world of chaos, it’s nice to have the enduring order in Dmitri Mendeleev’s table.

Based on their atomic masses and chemical characteristics, in 1869, Mendeleev had an amazing vision of the relationships of the chemical elements. Quite a masterpiece, Mendeleev’s table (shown at right) is as familiar to chemistry students as a paintbrush is to a painter, summarizing an entire science in 100 or so squares containing symbols and numbers. The periodic law that he uncovered organizes the elements, arranged to reveal patterns in their properties, guiding the pursuit of chemical research. His law revealed profound relationships among the known chemical elements — they exhibited similar properties at regular intervals (or periods) when arranged in order of their atomic weights. This allowed him, and others since then, to predict the existence of elements that had not yet been discovered.

By Mendeleev’s own account, he wrote each of the 63 known elements’ properties on an individual note card. Through chemical solitaire, he found the pattern he was seeking and arranged the cards in vertical columns from lower to higher atomic weights placed elements with similar properties in each horizontal row. This remarkable periodic table was born. 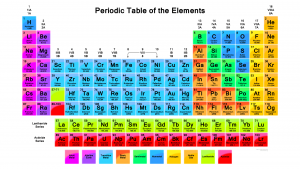 2019 Periodic Table with 118 elements from https://sciencenotes.org/periodic-table-pdf-2/

Although there were only 63 elements known in 1869, the organization still holds. Today there are 118 elements (shown at left)! The newest elements include nihonium (Nh), moscovium (Mc), tennessine (Ts) and oganesson (Og). Every element on this table has its own amazing story.

Telling their own stories, over 50 K-12 students have created poems and illustrations related to this topic that will be posted at the the Celebrate Science Indiana festival! Winners of the contest will be announced!

We commemorate this anniversary at some of the booths at Celebrate Science Indiana on Saturday, October 5 from 9:30 AM to 5:00 PM in the Elements Blue Ribbon Pavilion at the Indiana State Fairgrounds – who will focus their hands-on activities around marvelous metals. Elements will be printed that the kids can color and display on the wall or take home. Who knows, perhaps some of these young minds might use this table to make a scientific discovery that will also last for 150 years! We’ll provide the excitement – you’ll have to provide the note cards!

Experience "Antarctica -- The White Continent at the Bottom of the Earth” in two presentations at Celebrate Science Indiana on Saturday, October 5

Your personal invitation to attend Celebrate Science Indiana on Saturday, October 5 from 9:30 AM to 5:00 PM