Remember the raffle that you signed up for if you filled out our Celebrate Science Indiana Survey? Thanks to a donation by The Heritage Group, the Blackburn family of four that attended got to enjoy their first live Colts game at Lucas Oil Stadium.

On Oct 30th, 2022, the Indianapolis Colts played the Washington Commanders. Although they lost by 1 point, the Blackburn family got to celebrate Tarik Glenn’s induction into the Colts’ “Ring of Honor.” Glenn is another member of the Super Bowl XLI team and the longtime protector of Peyton Manning’s blindside – now he sits just a few names over from him in Lucas Oil Stadium. He was surrounded by Hall of Famers Peyton Manning, Edgerrin James, Marvin Harrison and other Colts legends that lined up to shake his hand during the show. 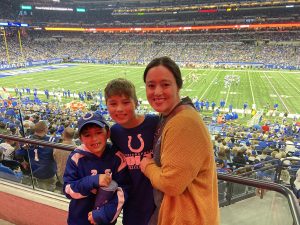 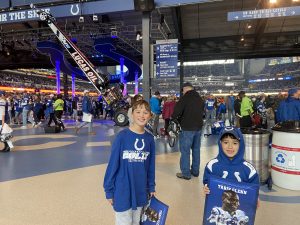 “Thank you for the Colts tickets!  This was our first Colts game, and we had a blast!“

Celebrate Science Indiana About to Launch!!