The top 40 students from the four Indiana Local Challenges in Evansville, St Joseph County, Indianapolis North and Indianapolis South which occurred throughout February and March participated in the 2019 Indiana State You Be The Chemist Challenge.

Kurt Hettinga, President of Superior Solvents & Chemicals and Member of the Chemical Educational Foundation Board of Trustees and Linda Osborn, Project Chemist at The Heritage Research Group welcomed the students and audience and shared some inspiring remarks for the students.

The challenge consisted of 7 Rounds of chemistry based multiple choice questions which were used to identify of the top 4 students of this year’s state competition. Congratulations to all 40 students who participated as they were all winners already being the top students from the Indiana Local Challenges. All 40 students received a participant medal, certificate and CEF giveaway. 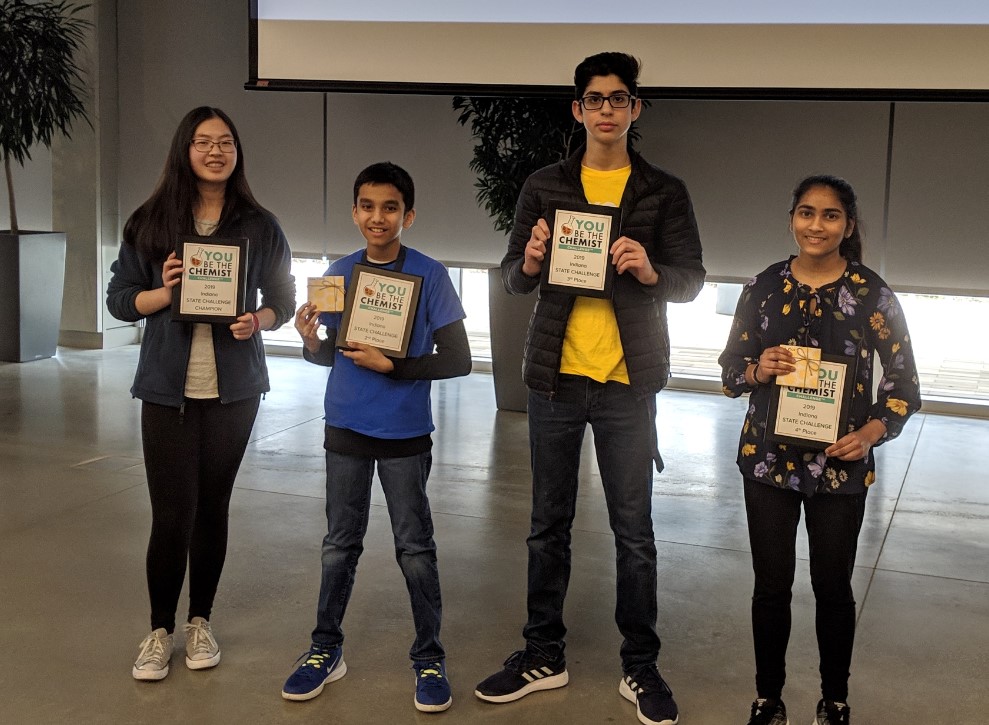 There was also a drawing for a 12” plasma globe. All educators who had students participating in one of the four Indiana You Be The Chemist Local Challenges were eligible. Michele Schulz, Lebanon Middle School was the winner.

Our sincere thanks to the teachers and parents of this year’s challenge participants for supporting and encouraging them as they prepared for the Local and State challenges.

A special thanks to Kurt Hettinga (President, Superior Solvents and Chemicals) and Linda Osborn (Project Chemist, The Heritage Research Group) for their welcoming and inspiring remarks to the students and audience, to Patricia Maldonado (Associate Consultant, Quality R&D at Elanco) for serving as the moderator for this year’s state challenge, to Marcia Gillette (Professor at IU Kokomo), Dylan Engels (Chemist at Superior Solvents and Chemicals) and Linda Osborn (Chemist at Heritage Research Group) for serving as content judges, and to Mary Pat Knadler (Lilly retiree) and Kurt Graper (Dow AgroSciences retiree) for serving as conduct judges.

And our sincerest thanks to the sponsors for this year’s state Challenge, Superior Solvent and Chemicals and The Heritage Research Group.